The lawsuits are stacking up in courthouses across the state, sometimes dozens per day, identifiable by their unusual names: Jane Doe vs. Doe Archdiocese. M.L., an individual, vs. Doe 1, a California organization. John Doe #1 vs. Roe 2, a California entity.

In the waning days of a three-year window that gave adults more time to file lawsuitsover childhood sexual abuse, California is seeing a flood of new litigation.

Spurred by a 2020 change in state law, thousands of lawsuits alleging abuse as far back as the 1940s have been filed against dozens of organizations, including religious groups, private and public schools, sports groups and nonprofit organizations. In some cases, the alleged perpetrators have been dead for decades.

The number of lawsuits is expected to rise sharply before the Dec. 31 filing deadline. After that, people older than 40 will once again be barred from suing over abuse suffered in California as children.

The volume of cases filed during this three-year period is expected to eclipse filings from 2003, when California became the first U.S. state to temporarily lift statutes of limitations for childhood sex abuse in the wake of the Catholic Church scandal. An estimated 850 clergy abuse victims and 150 others sued churches, the Boy Scouts and other institutions.

This time, more than 2,000 lawsuits have been filed against the Catholic Church alone, attorneys said. Plaintiffs are also seeking damages from public entities such as schools, which were previously excluded.

“The cultural view of childhood sexual abuse now, as opposed to 2003, is night and day — it’s very, very different,” said Joelle Casteix, a spokesperson for the California chapter of the Survivors Network of those Abused by Priests. “We know that survivors in the church are far more likely to come forward.”

Casteix said she typically receives about 20 messages a month from people seeking advice about a childhood sexual assault. Recently, she said, that number has been closer to 60 per week, suggesting that many people were still deciding about a lawsuit in the final days of the window.

The wave of litigation could have far-reaching financial and legal implications for organizations that work with children, particularly for groups that employed adults who were known to be abusers, experts said.

The Roman Catholic Diocese of Santa Rosa has already announced plans to seek bankruptcy protection. In a statement first reported by the Santa Rosa Press Democrat, Bishop Robert Vasa described bankruptcy as the “inevitable result of an insurmountable number of claims” — about 130, dating back to its founding in 1962.

Seeking bankruptcy protection often freezes most or all litigation and can limit the assets available for legal settlements. Victim advocates say the move also allows organizations such as the Catholic Church to postpone or avoid depositions and document discovery in lawsuits that might uncover past misdeeds.

“They use it as scandal avoidance,” said Mike Reck, a Los Angeles attorney who handles childhood sexual assault lawsuits. “It freezes everything immediately.”

Catholic dioceses in California eventually paid more than $1.2 billion to settle sexual abuse lawsuits from the 2003 window. They were also forced to release thousands of confidential documents that showed church leaders, including Los Angeles Cardinal Roger Mahony, had made plans to shield admitted molesters from police.

Lawmakers in California tried several times to reopen the state’s litigation window while Jerry Brown was governor, but Brown vetoed the bills. He wrote in one message: “There comes a time when an individual or organization should be secure in the reasonable expectation that past acts are indeed in the past.”

The law also permanently extended the statute of limitations for reporting childhood sexual assault from the time a victim is age 26 to age 40.

“Just because we are seeing a flood of cases doesn’t mean that child sexual abuse is a new problem,” Casteix said. “It’s an old problem that has been covered up for far too long.”

A group of Catholic bishops, including Los Angeles Archbishop José Gomez, fought AB 218 in court, arguing that the law was unconstitutional. The Supreme Court denied review of the case in June.

The law requires every plaintiff older than 40 to file a declaration from a licensed mental health professional, certifying that there is a “reasonable basis to believe” that sexual abuse occurred. That provision, also included in the 2003 litigation window, is designed to weed out false claims.

Lawsuits also do not publicly name the defendants until a judge signs off. Until then, institutions and individuals are listed in the court filings anonymously.

When a Louisiana woman accused 85-year-old Warren Beatty of assaulting her in 1973 when she was 14 and he was 35, bemused reporters noted that the complaint did not name Beatty, but did describe him as “portraying Clyde in ‘Bonnie and Clyde.’”

That also makes counting the number of AB 218 lawsuits difficult. Lawyers estimate that nearly 70 lawsuits have been filed against the Los Angeles Unified School District, but expect that the total is higher.

More than 200 former foster children have also alleged abuse by the staff at MacLaren Children’s Center in Los Angeles County, which was open from 1961 to 2003.

About 850 cases had been filed against the Catholic Church in Los Angeles and Orange counties as of mid-December, but that is “almost certainly an undercount,” said Reck, who is one of the attorneys appointed to represent plaintiffs in the proceeding, which is being coordinated by a Los Angeles County Superior Court judge.

In Northern California, more than 1,000 cases have already been filed, and that number will probably rise to more than 1,200, said Rick Simons, the lawyer serving as plaintiff’s liaison for those cases. Those cases are being coordinated through the Alameda County Courthouse, and the first trial date is set for April, Simons said.

Starting Jan. 1, California is lifting another statute of limitations for sexual abuse. The three-year window will allow adults who said they faced sexual abuse by another adult to file lawsuits through the end of 2025. 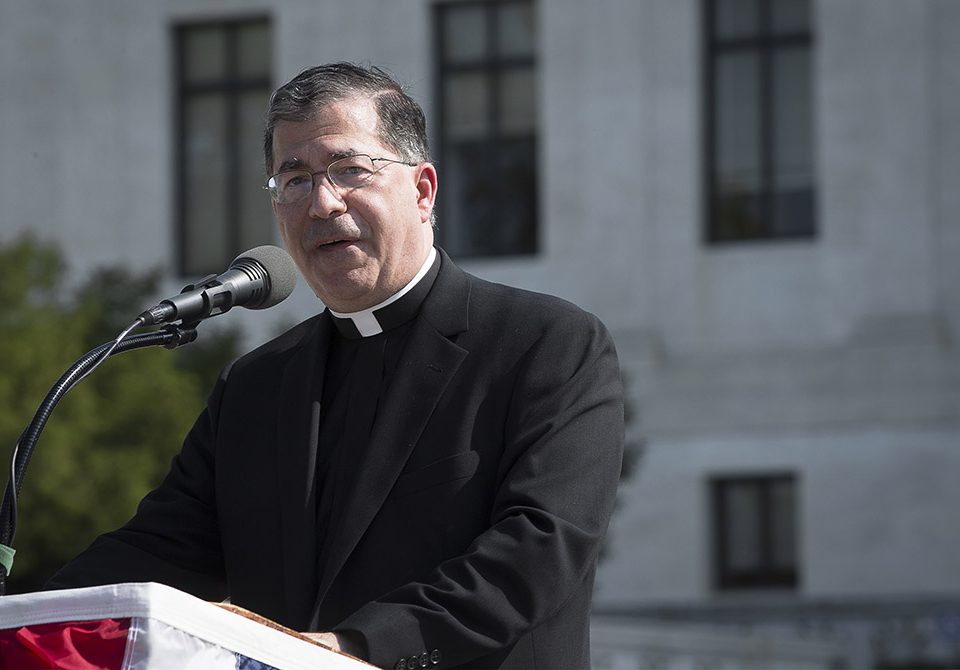 Father Frank Pavone, national director of Priests for Life, speaks in front of the U.S. Supreme Court in Washington Oct. 1, 2019, after a petition with more than 250,000 signatures calling for Roe v. Wade to be overturned was presented to the court.