The Axis of evil in the Archdiocese of Los Angeles 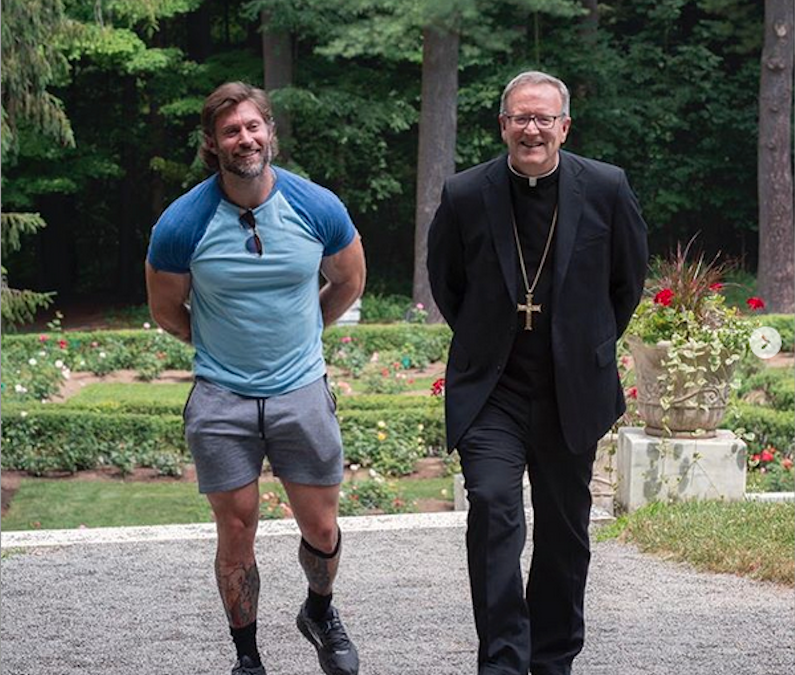 Like many Catholics I was starting to follow Bishop Robert Barron and started buying his Word on Fire materials. He was spending millions to become a “social media superstar”, and his popularity was growing rapidly. But I was quite troubled to see his behaviors and the people around him when I first met him in person in October of 2017. (We will discuss his heretical messages at another time).

For some reason that is leading to a scandal, Barron is always surrounded by one or more muscular, tattooed men. Everywhere he goes, I mean everywhere Barron goes, he is always accompanied by these men. What’s more disturbing, he employs them, he pays them higher than high salaries, and it appears that one or more of them live with him. (White Pages listing)

When Barron started his Word on Fire Ministry (“WOF”) he named Jared Zimmerer as its executive director. Based on publicly available information, Zimmerer has been a competitive bodybuilder and became a catechist at his Texas parish but had no experience in non-profits or any executive level experience when Barron hired him. Today, Zimmerer is still an executive at WOF and a very close friend of Barron’s. Disturbingly, Zimmerer keeps posting pictures of himself showing his muscles with very little clothes at times. No morally driven corporation, school, private or public or religious organization would ever allow an executive to post those kinds of pictures online. Zimmerer’s public profile claims that he is an athlete, married and has 6 children. It is ironic to think that Bruce Jenner had the same public profile description at one point with the same number of children. But back to the issue, why would a Catholic Bishop, a man under obedience, allow an employee to exhibit his body publicly and lustfully?

But wait, Zimmerer is just the tip of the iceberg. It gets worse.

Meet “Father” Father Steve Grunow the CEO of Word on Fire Catholic Ministries and a “priest in good standing” according to the Archdioceses of Chicago and Los Angeles. A short, 4.9 feet “priest” with a Napoleon complex that also makes a point to show the world that he has big muscles and is starving for attention (vanity).

Again, why would any man do this? And this man is a priest for crying out loud! Why? I have asked this question to many people including friends of mine that are or were gay and all of them tell me that these patterns are very common amongst gay men. They use these kinds of pictures in their profiles in gay dating sites and apps like Grindr. Does the name Monsignor Burell, (another one of Archbishop Jose Gomez’ staff member) ring a bell?

We also noticed that Barron likes to spend time meeting with young seminarians at the St. John’s Seminary, and frequently invites seminarians and newly ordained priests to stay at his house overnight. Most noticeable, Barron recently invited Fr. Michel Mesa and Fr. Justin Oh.  According to seminarians Mesa and Oh have had a romantic relationship for many years.

Are we insinuating that Bishop Robert Barron is an active homosexual? That is a good question that we can not answer with 100% certainty. With that said, Barron’s statements about same-sex marriage and his close relationship and public praising of male sodomy promoter “Fr.” James Martin gives us another disturbing hint in that direction. But Martin is not a bodybuilder so let’s leave him for a future article.

Now, meet Joseph Gloor, Barron’s photographer, producer, travel companion, roommate, and closest friend. According to Gloor’s Linkedin profile, he started working for Barron’s WOF in 2016. Gloor claims to be “male model” and was a public-school English teacher before he started working for Barron. Nothing, nothing in his background tells us that he had the experience to be a producer, or photographer.

Why would Barron hire a person like Gloor and why are the two always together? A single, 40 years old, white “male model” working so closely with a Catholic Bishop? I do not know about you, but I find this extremely troubling.

Gloor is not shy and his social media postings show that he is starving for attention and public praise (vanity, lust). He posts half-naked pictures, showing his muscles and tattoos to the world while being employed by a Catholic Bishop. Again, no corporation, school or religious organization in the US would EVER allow an employee to post these kinds of images online or anywhere. Most corporations have a Morals Clause, in their employment contracts. Barron, a Catholic Bishop apparently does not have this clause in his employment contracts or perhaps he allows (and enjoys) this. What is Gloor trying to tell the world and why is Barron allowing this? Why are the Archdioceses’ attorneys not stopping this? Barron is creating a scandal by allowing these public displays of indecency and vanity from his employees. Barron is also creating scandal and raising questions about his sexuality and his views and approval of, vanity, lust and  homosexuality by allowing this.

It just gets worse! Another important and quite unsettling fact to note is that Joseph Gloor is the least experienced and highest paid employee at WOF ranking a salary of $135,000 per year. Gloor makes more money than the director of development, and the president of WOF (Barron’s brother). Why would Barron pay his photographer and travel companion that much money? The median salary for a documentary producer or photographer in Los Angeles is $52,000 per year and this is for a for-profit company. His work experience does not match this level of salary, period. Gloor also gets free meals at Barron’s house and when traveling. At a 5000 calories daily diet that Gloor claims to have, that becomes another $50,000 to $80,000 yearly expense for WOF. So, in our calculations, Barron is rewarding his “producer” with over $210,000 a year in salary and meals. Plus, around-the-world 5-star travel plus other benefits. That amount of salary with that experience sounds more like a gift or a bribe than a salary. Are you getting the message so far?

Let’s not forget that Barron extorted $1.5 million from the Federal Paycheck Protection Program when he had over $7million in cash reserves that could have covered his payroll expenses for several years and while small businesses in his diocese suffered financially.

An anonymous source that works for Barron told me that Barron is also a bodybuilder, and he does this to stay fit. We have not found any evidence about this so far. Also, any experienced psychologist or psychiatrist will tell you that bodybuilding at the level that Barron’s boys are, is not a fitness practice but a very dangerous addiction. Maintaining these muscle masses very often requires steroids and other dangerous mind-altering illegal drugs according to several physicians we spoke to.

So, to answer the question is Barron an active homosexual? Well, we really don’t know and affirming this would make us sin. The fact, based on the evidence presented here, is that Barron does enjoy having younger, muscular, tattooed white men around him always and he pays them unusually high salaries that look like bribes to keep them around. We find this disturbing and very questionable to say the least.

Because Barron’s actions, behaviors, views on same-sex marriage, heretical messages and apparent strange, disturbing musclemen fetish go against Church teachings, it is our right and duty under Canon Law to manifest to the clergy and others of Christ’s faithful our views on matters which concern the good of the Church.

Are we creating a scandal? NO, Barron already created the scandal. We are only exposing it. We have communicated these concerns to Archbishop Jose Gomez and Margaret Graf, the Archdiocese attorney and the Apostolic Nuncio but our numerous written, verbal, and electronic communications have been ignored. We pray for someone with clerical authority to stop Barron for the good of the Church. We pray for the Catholic community to see what we see in Barron, a dangerous prelate with a very large ego, higher ecclesiastical ambitions, who is using his large social media platform to spread heretical messages, praise male-sodomy promoters and who is prone to self-made scandals that are and will continue to damage the Church if we don’t stop him.

For our part, we stopped listening to his heretical messages, donating to WOF or buying any of their materials a long time ago. At times, when we remember how much money we gave this prelate and his Word on Fire scam, we think about suing Barron and WOF for false advertisement and fraud.