Letter to the Pope, bishops and Clergy 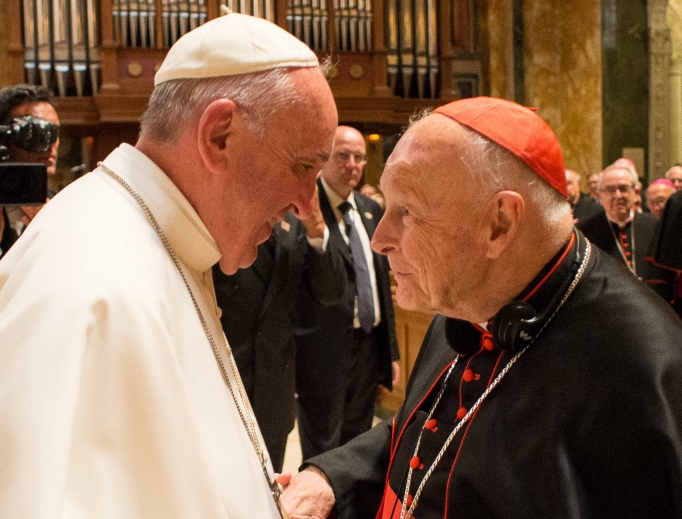 As the McCarrick revelations and the report is published, we are still waiting for cardinals Mahony, Wuerl, Culpich, Dinardo and bishops Gomez, Barron and hundreds of others to be exposed and expelled. Most belong in jail.

The Vatican on Tuesday released a much-anticipated report about Theodore McCarrick, a former cardinal and archbishop of Washington who was defrocked after allegations of sexual misconduct with adults and minors. Here’s what you need to know about him:

Who is Theodore McCarrick?

McCarrick was one of the most popular and well-known leaders in the U.S. Catholic Church until June 2018, when the then-87-year-old cardinal was suspended for allegedly sexually fondling an altar boy decades earlier. McCarrick, who grew up poor in New York’s Washington Heights neighborhood, went on to become a friend and confidant of presidents, prime ministers, professional athletes and other celebrities and was known publicly as a tireless peacemaker, a fundraiser for many Catholic causes and an epic schmoozer. Starting as early as the 1990s, quiet reports of McCarrick’s inappropriate sexual behavior began traveling all the way to the Vatican, yet he continued to rise to lead dioceses in New Jersey — in Metuchen and Newark — and then D.C., where he was made a cardinal. McCarrick was suspended in 2018, then in 2019 became the first-ever cardinal laicized for sexual misconduct with youths and adults.AD

What is the “McCarrick report”?

In the weeks after McCarrick’s June 2018 suspension, multiple other accusations against him surfaced, as well as revelations that there had been some complaints to the church hierarchy over the years along with legal settlements between victims and three New Jersey dioceses. The Vatican press office in October 2018 put out a statement saying that Pope Francis was “concerned by the confusion” among Catholics about what really happened. It said there would be a “thorough study” of all documents accessible to the Vatican “in order to ascertain all the relevant facts, to place them in their historical context and to evaluate them objectively.” The report, titled “Report on the Holy See’s institutional knowledge and decision-making process related to former Cardinal Theodore Edgar McCarrick (from 1930 to 2017),” is overseen by the Vatican’s secretary of state. Rumors and accusations of who knew what, and when, have flown since 2018, dividing an already polarized church, and many Catholics are looking to the report to clarify who in the hierarchy is accountable, including the three popes. Experts say the report is the most extensive public investigation the church has done into a cleric of McCarrick’s stature.

Who knew about the allegations against McCarrick before 2018?AD

There are reports in the 1990s that some bishops and archbishops fielded complaints about McCarrick inappropriately touching seminarians and priests. A New York priest named Boniface Ramsey said he wrote in 2000 to the Vatican’s ambassador to the United States with similar complaints of questionable sleeping arrangements. A former Vatican ambassador to the United States, Carlo Vigano, alleged in an 11-page letter in August 2018 that the complaints were so rampant that Benedict placed private sanctions on McCarrick, barring him from celebrating Mass publicly or traveling. Vigano’s allegations hadn’t been verified, and McCarrick continued to work in public for the church. McCarrick himself told The Washington Post in 2002 that he had been accused when he was in Newark (where he served from 1986 to 2000) via an unsigned letter to others in the church hierarchy accusing him of abusing youths in his own family. He told The Post that he sent it to the Vatican’s U.S. ambassador. “Nothing ever happened,” McCarrick told The Post of the outcome of the letter.

Have people been held accountable?

Not nearly enough, say some victims and their advocates. McCarrick’s fall was dramatic, but Vigano’s 2018 letter was a bombshell. It alleged that many top church officials — including Popes Benedict and Francis — had been aware of sexual misconduct allegations against McCarrick years earlier but still allowed him to appear as a speaker and celebrant at church functions and to represent the church in prominent diplomatic efforts in places such as China and Iran. The McCarrick case has rocked the Archdiocese of Washington, where his successor, Cardinal Donald Wuerl, retired in October 2018, before he had planned to, amid controversy over his handling of abuse cases when he was bishop of Pittsburgh. In January 2019, after denying repeatedly that he’d known anything before June 2018 about sexual misconduct allegations against McCarrick, The Post reported that Wuerl had known and had reported them to the Vatican in 2004.ADhttps://3c3c9486b2e6365030f176cb103ff66e.safeframe.googlesyndication.com/safeframe/1-0-37/html/container.html

What are some possible impacts of the McCarrick report?

The report is expected to be a straightforward accounting of who knew what and when, and what they did or didn’t do about it. It won’t include recommendations. Many Catholics are hoping or expecting that it will lay blame and result in punishment of clerics, and will clarify what role, if any, Popes John Paul II, Benedict and Francis had in elevating McCarrick or covering up McCarrick’s sexual misconduct. The Vatican isn’t planning a news conference Tuesday. Some think the fact that the Vatican is releasing the report just a few days before the U.S. Conference of Catholic Bishops has its twice-annual meeting is a sign that there will be something in it for bishops to act on to make the church more transparent and accountable.

What kind of charges, civil or criminal, could McCarrick still face?AD

McCarrick faces allegations in different parts of the country and in different decades, so his legal liability is a patchwork, said Marci Hamilton, founder of Child USA, a think tank at the University of Pennsylvania that studies child abuse. New Jersey and New York recently opened legal windows for victims of child sexual abuse; both expire in late 2021, she said. If any victims experienced abuse in Maryland, there is no criminal statute of limitations, she said. Criminal statutes of limitations in most places expired long ago.

How many people were allegedly victims of McCarrick?

A source with direct knowledge of all the claims that U.S. church officials sent to the Vatican told The Post in fall 2019 that the number of complaints involving people younger than 18 is at least 10. Then in December, another man sued, saying McCarrick abused him when he was 14. The same source, who spoke on the condition of anonymity because canon law forbids unauthorized people to speak about internal cases or even to acknowledge that the cases exist, said at least six allegations of sexual abuse by seminarians and former seminarians also were sent to Rome. His alleged victims include some who have spoken out, including James Grein, a Virginia tennis coach who said McCarrick baptized him and then began abusing him when Grein was 11, in the late 1960s.

Where is McCarrick now?

Those close to him won’t say where the 90-year-old layman is living. Until January, McCarrick was staying at a Kansas friary. He had been there since 2018. Catholic News Agency reported in January that McCarrick and the Franciscan friary staff were worried about the Vatican report and the press and disruption it could bring.

Michelle BoorsteinMichelle Boorstein is a religion reporter, covering the busy marketplace of American faith. Her career has included a decade of globe-trotting with the Associated Press, covering topics including terrorism in the Arizona desert, debates on male circumcision, Ugandan royalty, and how strapped doctors in Afghanistan decide who lives and who dies. Follow